While we all love a fun road trip, those lengthy journeys may seem nerve-wracking due to restlessness. These simple, yet fun games will help in keeping everyone in the car entertained. You can take your games a notch higher by adding an incentive or prize. It works as a great motivation, especially to those who may not be very keen on playing. So, gather your friends and plan a fun road trip with your car rental. On route, enhance your on-road experience through these fun and interactive lists of games.

As the name suggests, it is ideal for movie fanatics. You start by naming an actor/actress from a particular movie. The next person says the name of the film, followed by the next person stating the name of another actor from the film. The game continues until someone shouts out the wrong name.

The good old classic game, where the sentence begins with ‘I spy my little eye on…’ It is very entertaining and is suitable for both kids and adults. For those who don’t know, it starts with an individual picking an object on sight and giving a clue by stating the starting letter of the item. 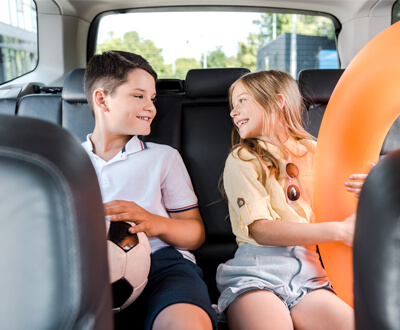 The objective of this game is to pick a letter and category, taking turns to state the word. For example, the letter could be ‘S,’ and the division is clothing. You have to continue playing until someone is unable to name a clothing item, starting with the letter ‘S.’ You can change the category as you progress through the game.

It is another fun game to play and to also test your friend’s speed. In this game, you mention the names of anything in the category chosen in alphabetical order. The choice of the type can be decided mutually and can only be changed after you’ve reached the last letter. You can get as specific as you like with the categories.

Challenge your friends’ memories through this game. It does, however, require a higher number of participants. The higher the number of people, the higher the level of the game. One person starts with a word. The one to follow has to say that word along with any new word of choice. It continues until someone forgets the sequence of words.